In 1913 this old pier was partly washed away and later torn down and a new one built to replace it. This pier was built of concrete 1,000 feet (300 m) long, and paved with asphalt its entire length. Small tiled pavilions were erected at intervals along the sides to afford shade for fishing and picnic parties. A bait stand was built eventually out on the end.

Soon after, about 1914, an auditorium building was constructed; it has housed various enterprises and at present the public rest rooms, the Los Angeles Life Guard Service, and the local branch of the Los Angeles County Public Library occupy rooms in the building. This pier is municipally owned. The pier’s frontage has changed in appearance over the years and electric train lines used to run along the coastline. 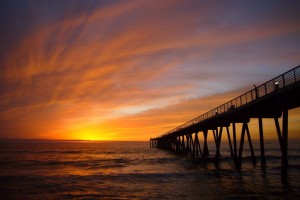